Right. So I'm starting to write this on boxing day. I have a couple of hours to spare before more family visitations go down and since I can't quite be bothered doing anything too creative I thought I would draft together a year in review type thing...

Not really familiar with the Google stats tools, but here goes: 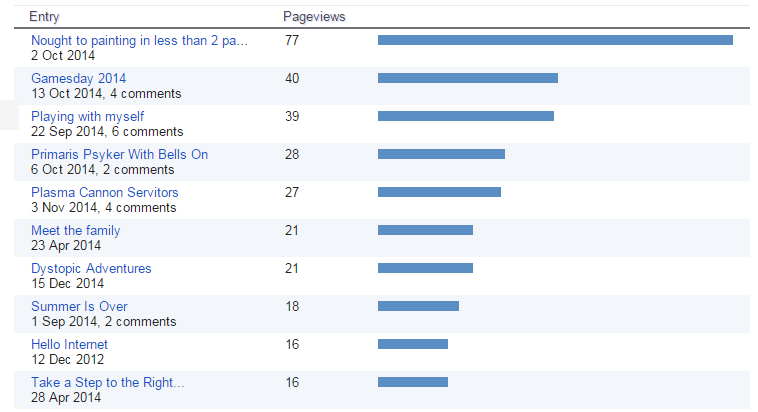 So what can I make of all this? Well I'm pretty chuffed that I've managed an average of one post a week for a whole year, especially considering the summer break and nothingness. So thank you for reading this. Extra mega-thanks to my 4 followers. Hi 5s and brofists all round.

Looking at the top posts it appears that by far the one with the most hits is the paint station thingy that i put together in response to this post here over at cadian shock. I think that this shows the value of actually engaging with my fellow bloggers out there. I got to admit that I am more of a lurker than a commenter so i should probably do something about that. In fact this comment appear as my top traffic source. Can't really argue with those facts!

The Good
The Bad
The Ugly

Stuff happens in real life too! Been at my job for a year and a bit now and i'm really enjoying it. On a personal level things have been developing too. I've started hiking loads this year and met some cool people doing so.

On a down note I haven't been keeping up with various groups of friends as much as I would like. Visits to the Swan have dropped off, I mean who would have thought that doing healthy stuff, like hiking and running would mean that I find it harder to do the unhealthy liver punishing activities that are also fun. I've got friends spread all over the place (Bristol, York, London, Norwich, Auckland, USA) and I see some more than others and some not at all. Pretty sad really. I rarely see local people never mind those who live further afield.

This year I properly got into Powerwolf. They are truly excellent. Best gig was Battlebeast at Rockharz over the summer.

My favourite movie is either Guardians of the Galaxy or The Raid 2.Too close to call.

Best TV show is either Arrow or Flash, I love those two shows. Honourable mention to Extant which I thought was most excellent.

I have made new friiends, found new music, done some good hobby stuff. Overall this was a good year.
Posted by fettFace at 14:09 No comments:

Email ThisBlogThis!Share to TwitterShare to FacebookShare to Pinterest
Labels: Musings, Year in Review

So I've had the bits of one of those ancient pontoon bridge army sets from when I was a nipper in my bits box for as long as I can remember, and these were the hulls of the ship.

So here is the first one.. 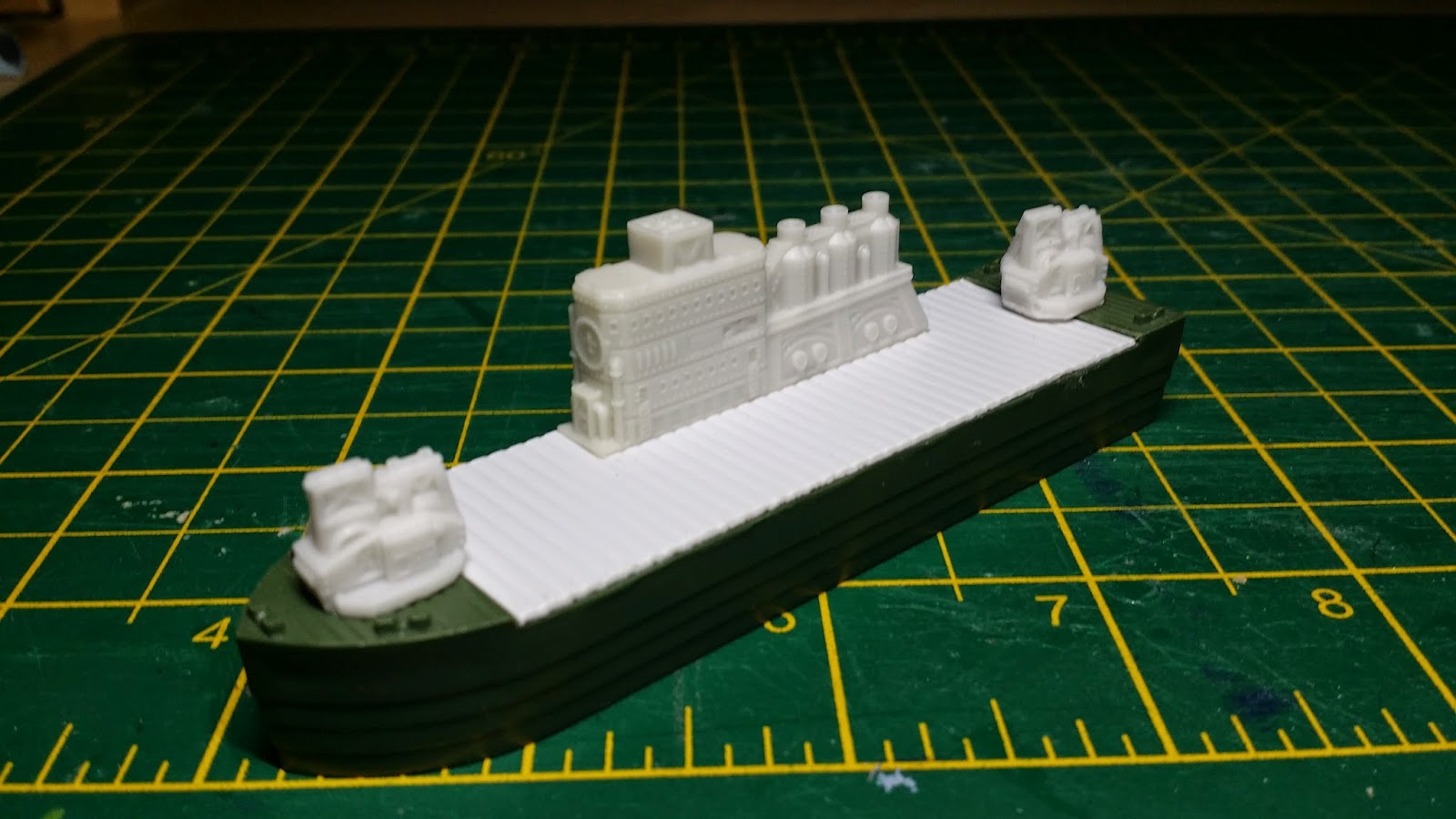 This guy is a simple flat bed cargo hauler type ship. I also made some interesting looking cargo but then decided not to photograph those pieces. The textured plasticard fits the scale really nicely. The pieces fore and aft (how nautical am I?) are what I think are folded up cranes that are from the merchant fleet box.

I also discovered that the resin pieces look many times better if they are recessed into the top hull plate rather than plonked on top.

Thanks for looking!
Posted by fettFace at 11:45 No comments:

I had a minor brain wave to use some old dvds for bases for various islands and things. I was looking at the oil rigs and thinking that they looked a bit delicate...

In general I have used cur up sheets of cork and then cork pieces for the rock outcrops. The silver pieces are waves that I made from since foil and then glued down with pva. I'm going to add layer of some resin or other too, Then result looked ok on my larger board so we'll have to see whether they transfer over well to these smaller islands.

Right. A bit of a change in direction. In order to do more Dystopian Wars stuff I decided, rather than to work on what I already have, I should get some more stuff and use that as a catalyst for injecting interest for myself in this games system. I've had some models for ages, and they featured in my haul of shame post from some time ago. So I decided to get the new rules and some new bits and to crack on with some building.. 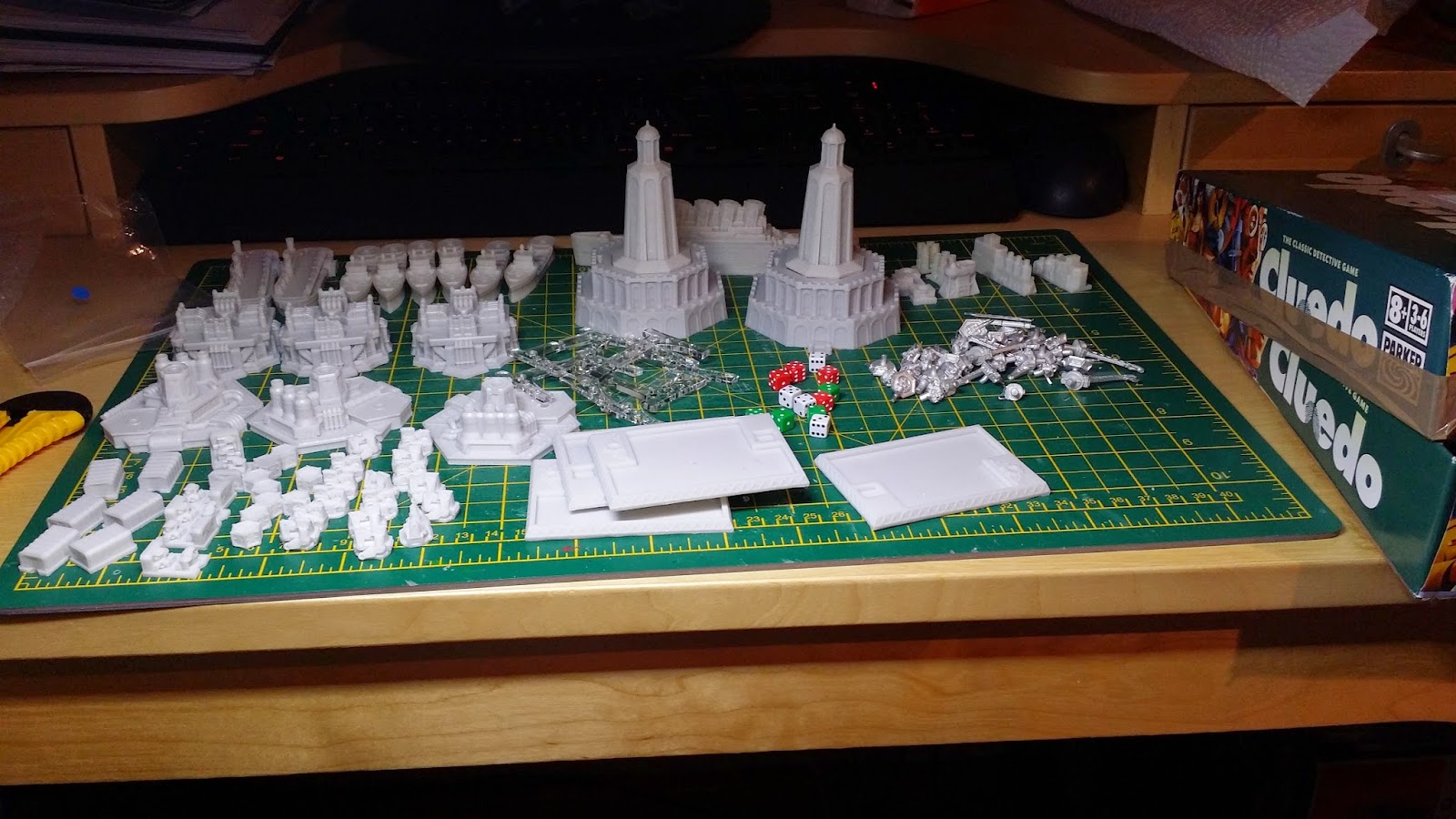 I bought the merchant fleet box and a couple of lighthouses and trays for the tiny fliers. Here they are unpacked and cleaned and ready to roll.
Posted by fettFace at 11:20 No comments:

I've saved my favourite assassin till last. For some reason the idea of a psychotic chemically deranged killing machine that can be unleashed at will is quite compelling. In my mind such warriors are almost tank like in their appearance and indeed their operation. Any way here are some pics... 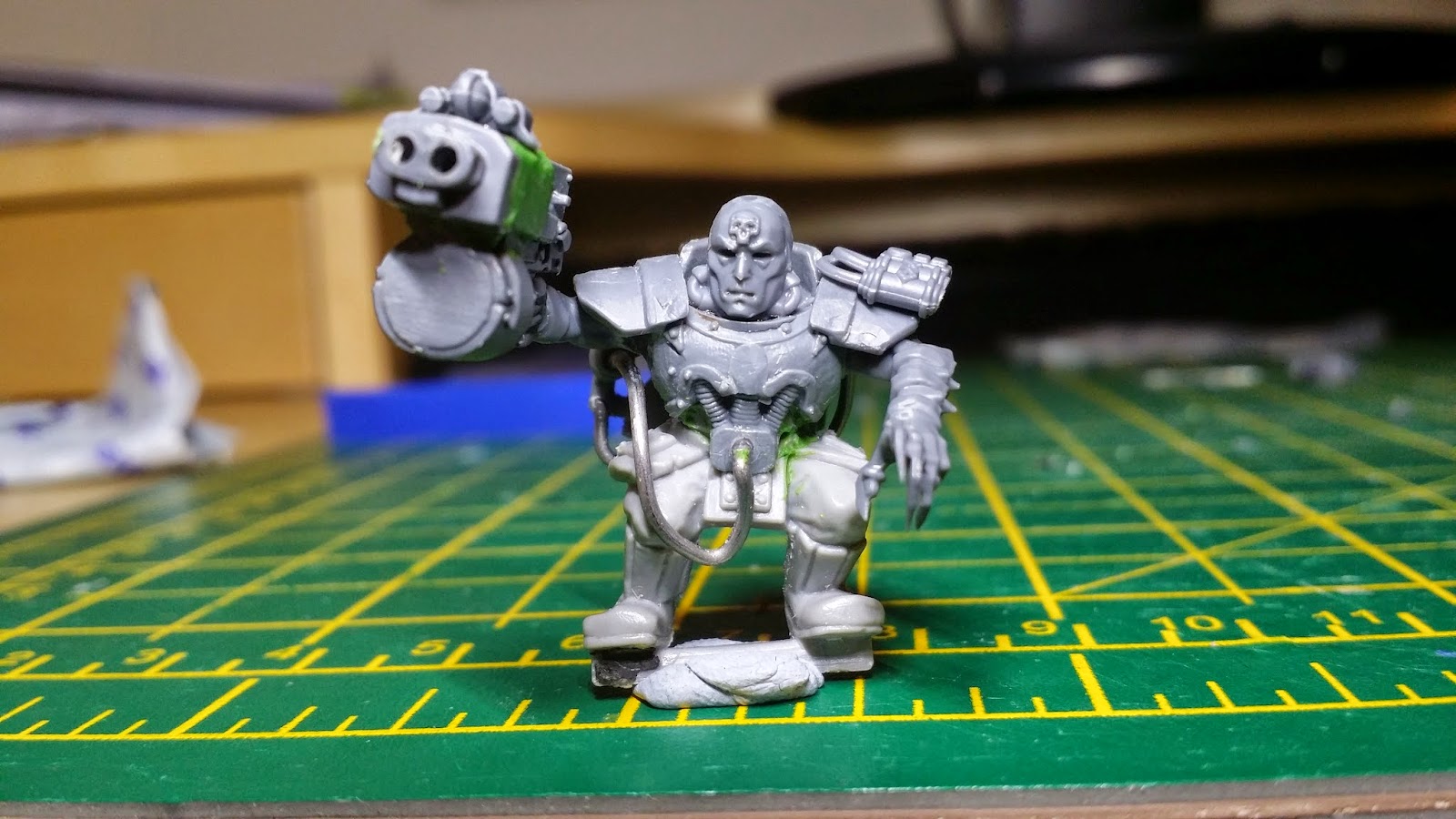 I gave him a squat and heavily armoured appearance. A chaos space marine body and I think some gorkamorka ork legs, ork shoulder pads (how 80s), a blood angel head with the spikey bits removed, a chaos cultist left arm and I dont know about the right. I then made a comedy gun from various bits. I think the drilled gun barrel is quite effective here. 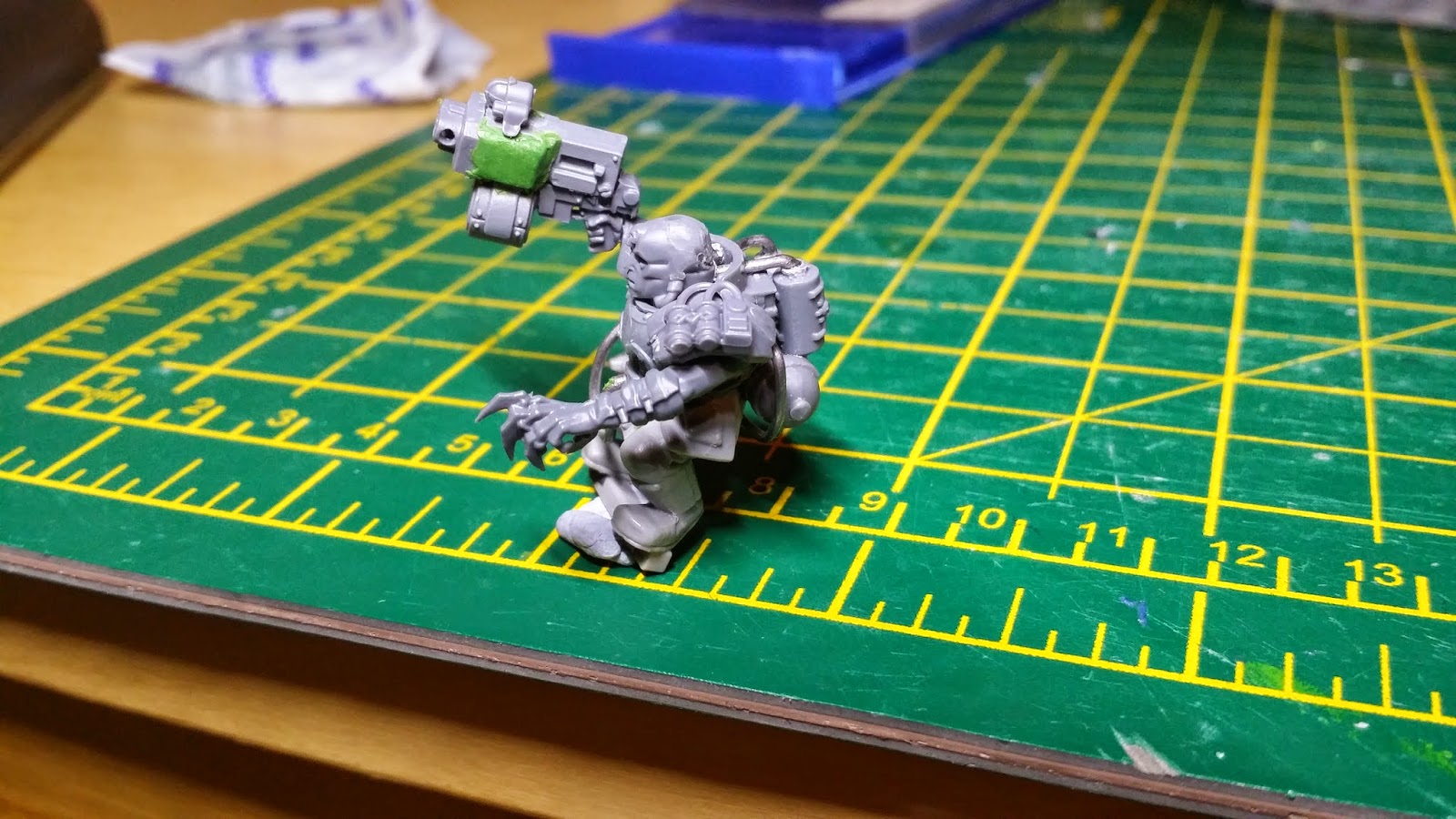 I then added a bunch of vials, canisters and fuel tanks from various sources. These represent the various chemical toxins that are injected into his system. 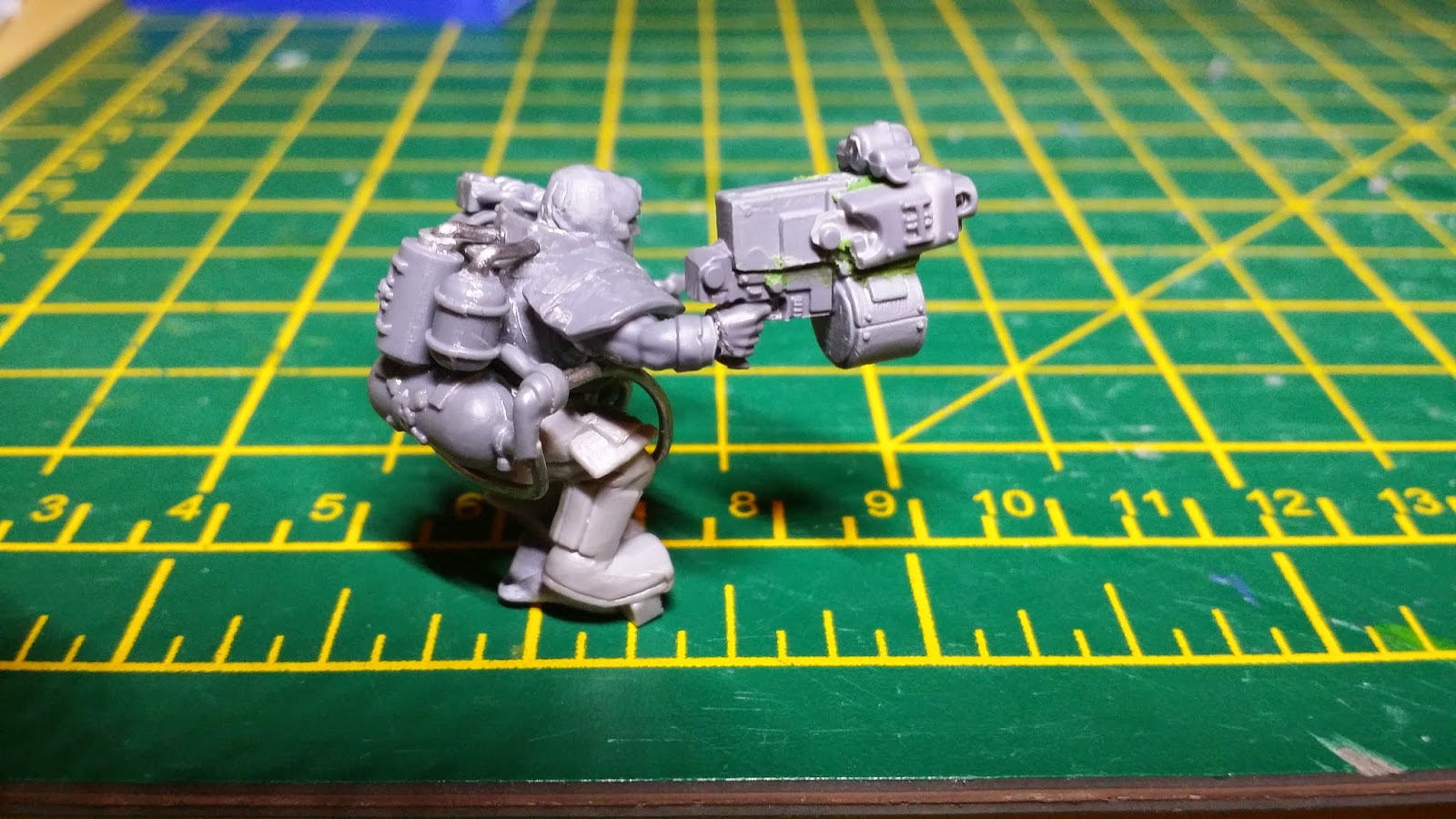 OK so the gun is far from perfect, but i'm really happy how this guy turned out.

Thanks for reading.
Posted by fettFace at 11:12 No comments:

Email ThisBlogThis!Share to TwitterShare to FacebookShare to Pinterest
Labels: Assassin

OK. My take on the Culexus Assassin. Personally I don't really like the massive skull that the regular GW model has. I kept the idea but toned it down a bit. Once more a chaos cultist was the basis for the model.

I tried to achieve a surgically implanted type look for the animus speculum, and I also used a pointing hand as a nod to the original. 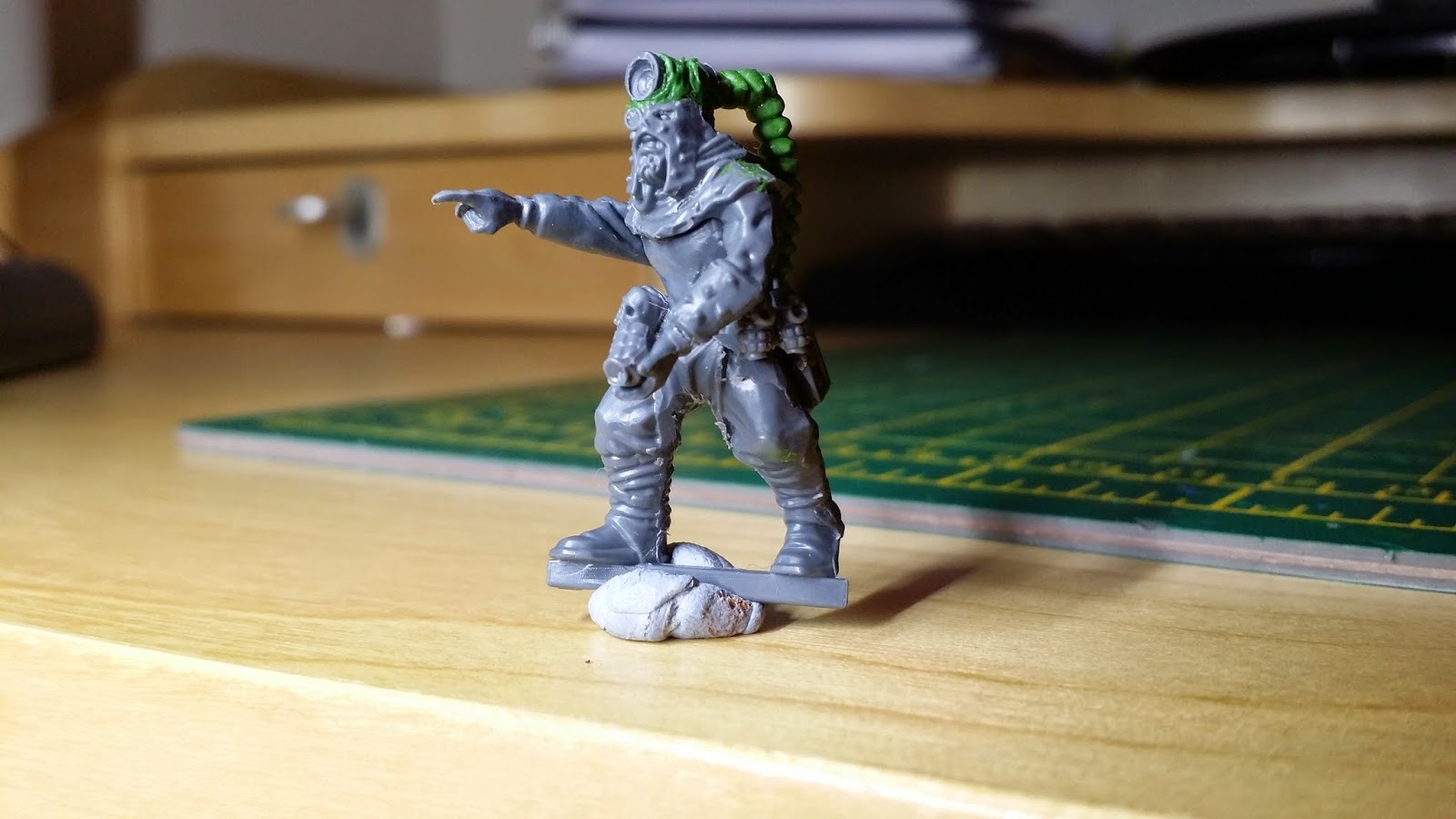 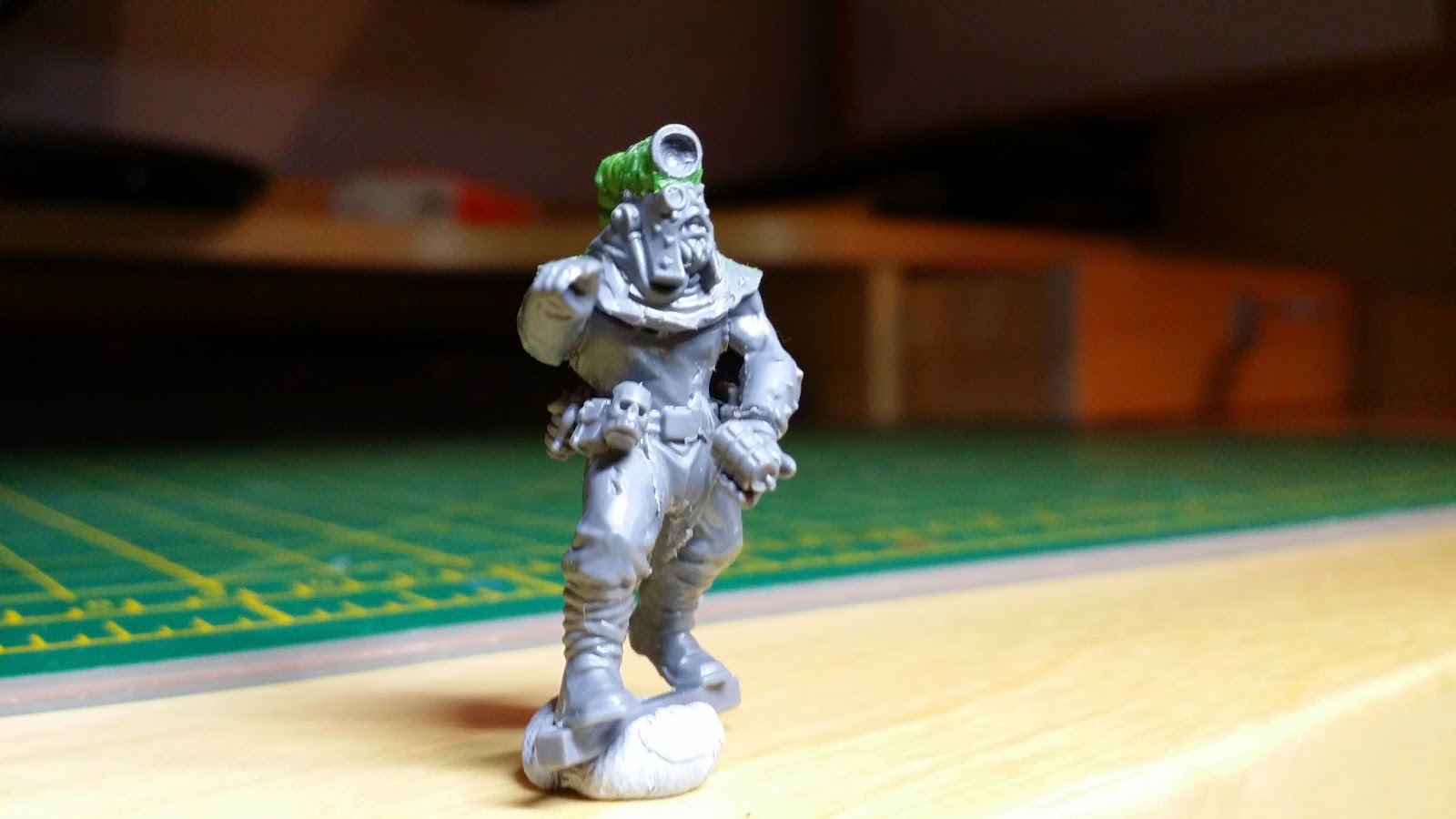 Thanks for looking
Posted by fettFace at 11:01 No comments: